The Lined Whinny Wellies® and Whinny Warmer® Sox, contain Celliant®, the world’s most technologically advanced fiber. Celliant is a proprietary blend of minerals which have been extruded into a polyester fiber. Celliant is based on three fundamental scientific principles: Your body emits heat; certain naturally-occurring minerals absorb heat and emit far infrared energy (IR); and IR is a vasodilator that delivers health benefits by increasing blood flow to tissue and muscles throughout the body, which delivers vital nutrients and oxygen to the cells.

Celliant is made of a patented blend of thermo-reactive minerals infused into the core of fiber which is used to create all types of textiles and fabrics so it does not wash or wear out. It is used in a diverse range of textiles and products made by brands about the world – apparel, bedding, medical, wetsuits, veterinary products and more. The applications are limitless.

Products made with Celliant fabrics absorb and convert body heat, naturally emitted by all living things, in the form of far infrared energy (IR). This energy is recycled back into skin and tissue in a safe, natural way, helping to rebuild and recharge the human body after physical activity and while you sleep.

Celliant has been extensively researched, developed and clinically tested for durability and effectiveness. Hologenix LLC, the makers of Celliant, have conducted research and organized nine clinical trials with institutions like the University of California Irvine and Texas A&M University.

Celliant is shown to increase tissue oxygenation by eight percent, which helps the body:

As of July 2017, the U.S. Food and Drug Administration (FDA) has designated Celliant products are medical devices and general wellness products, as defined in Section 201(h) of the Federal Food, Drug and, Cosmetic Act. According to the FDA, Celliant products were determined to be medical devices because they temporarily promote increased local blood flow at the site of application in healthy individuals.

Celliant is the first technology of its kind to be designated by the FDA as a medical device.

The FDA has determined that Celliant products are medical devices as defined in section 201(h) of the Federal Food, Drug and Cosmetic Act and are general wellness products. As such, the FDA has found that products containing Celliant:

Products containing Celliant have no adverse effects as they work directly with the body to enable it to be more effective and as such can be used continually. Celliant is NOT a coating. As such, it never washes out of the fabric. The fiber is also non-toxic and biologically benign. It works with the body to help it do what it does naturally. All Draper Therapies products are made in the USA.

Celliant is also designated as a Class 1 Medical Device in Canada, the European Union, Australia, New Zealand with more regions to follow.

Celliant vs. NO Celliant:The body on the right is wearing Celliant. You can see the body react with the Celliant to provide increased bloodflow and a balance in body temperature. The control subject on the left is not wearing Celliant.

Since its inception in 2003, Hologenix, LLC has been working to improve this new technology and bring it to market. Celliant was initially developed in the 1990s by studying methods to improve natural healing in Asia and then subsequently developing those techniques so that they could be integrated into fibers that are used in clothes and other textiles. Hologenix developed a patent protected method for adding the minerals into the center of the fibers where they remain and provide benefits without affecting the quality of the yarn.

Celliant’s blend of proprietary ingredients reflect light (both visible and infrared) back to the body changing the wavelength of the light so that it is more easily absorbed by the body. The energy from this light improves blood flow in the target area. Celliant works by increasing the amount of blood traveling into the affected area, not by causing the blood to absorb more oxygen. The increased local blood flow produces a variety of helpful effects, including improved cellular oxygenation, faster cell recovery, and temperature regulation. Many satisfied users have described the effects of better oxygenation on the body. More recently, the beneficial effects of Celliant fabric materials have been measured in a series of clinical studies, first among diabetics, then among healthy subjects. This is important because technologies like hyperbaric oxygen chambers claim to improve oxygen levels by causing you to breathe-in air richer in oxygen, but typical blood cells are already 95-100% saturated with oxygen when they reach their destination. 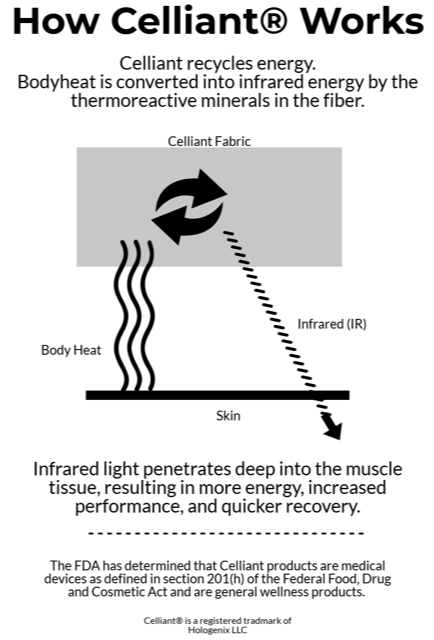