Owner's notes: "I have tried literally everything. and have had the vet out to sedate her, multiple times, so we could get the scabs off. In past falls she has been on SMZ's and prednisone to clear it up. I really have tried it all, including just about every topical concoction you can think of. I would love to be able to manage it without having the flair ups be so severe and without it costing me $100's of dollars every spring and fall."
Day 1 of Summer Whinnys. October 28, 2013

Owner's notes: "Brought Sophie to VLAC to have her legs cleaned up, shaved, and scabs removed. Aerobic, anaerobic, and fungal cultures were done. The worst part of her left hind left is the lateral upper portion of her cannon bone just below the hock. There are several other little sores on the medial aspect of the left hind. The worst part of the right hind is the medial aspect of the fetlock and pastern, both of which have large weeping sores. The right front has two small sores. After cleaning Sophie was only given bute IV for pain. Although the vet wanted me to put her on TMS I decided not to because I wanted to see the true effect of the socks."

Owner's Notes: "I washed her legs using EQyss Micro Tek Medicated Equine Shampoo (which I have been using on her legs for the last several years). I was able to get a scab off her left hind upper medial cannon bone. Her legs look quite a bit better, no redness, no swelling, and the scab areas seem to be smaller. I took new pictures to compare to day one. Quite a difference already! I especially notice a difference in her left hind anterior cannon bone where the redness has decreased a lot and the hair is growing back in. Her right hind medial fetlock and pastern area is also much improved. Areas that had been weeping the first day are no longer weeping but the best part is that the socks prevent big scabs from developing. The area is kept clean and dry so big scabs can't form. Her right hind anterior fetlock is another area that is looking quite a bit better."
Sophie Hoague 11-11-13

Owners Notes: Day 15, 11-11-13: "Today marks two weeks that Sophie has been wearing the Summer Whinnys. The difference is quite amazing. All of the scabs have gotten significantly smaller in the last two weeks. Her skin is pink and healthy and there are no weeping or open sores. Mind you that this improvement has been without the use of antibiotics. Using antibiotics might have sped things along but the progress has still been significant. The best thing is that there have been no new sores that have developed since she has been wearing the socks. I am finding using the socks to be very easy and well received by my horse. She does not mind me putting on, adjusting, or taking off the socks. Right now in Vermont we are at the height of the fall rainy, muddy season. Despite that, the socks have been working well and have kept her legs clean and dry. I really like that I don’t have to spend a lot of time applying topical treatments to her legs that are messy and they become harder to use as the temps drop. I also don’t have to keep her legs clipped. I find that the socks only fall 2-3 inches after 8 hours or so. My work shifts are 12 hours which sometimes means 15 hours between adjustments. They are falling less than they were when she was itchy but even if they do fall around her pasterns they do not seem to harm her in any way or constrict her pastern area. She seems to like the socks much better than the standing wraps I have done in years past. I would highly recommend the Summer Whinnys for scratches treatment.”
Day 30. 11-26-2013 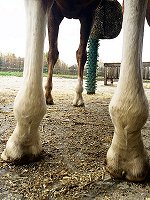 Sophie has not has another episode of Scratches since 2013. This photo was sent to us by Maureen in 2018. Sophie wears her Silver Whinnys® during the time of year when she was most prone to scratches and Maureen keeps them changed daily during this at–risk time.