This study demonstrates that in the absence of oxygen reaching the wound tissue uninterrupted healing
History: The owner, Kylie V. is a RN. You will be able to see her detail to wound care all the way through this. This study occurred during the winter of 2014-2015 and the challenge was to keep the tissue from freezing while it was healing. Due to extreme winter temperatures, oxygen reaching the wound had to be sacrificed but the knit of these deconstructed Summer Whinnys® continued to wick exudient material from the wound and provide the necessary hygienic environment around the wound that encouraged uninterrupted healing.

Sox For Horses chose the deconstructed Summer Whinnys® s tubing initially as the wound dressing and Whinny Warmers® to be put over the wound dressing. Standing Wraps were often used over the tubing. Temperatures ranged from the 20s during 2014 and by January 2015 dropped 20-40 degrees below zero at night.

Owner's Note: “I suspect that the other mare in the pasture clipped Jetta from behind while fooling around in the pasture. It was torn perfectly and being right on the back it would make best sense of being clipped from behind. The first day it happened there was a blizzard and the tissue was almost 100% frozen when I found it that morning so I didn't think to get a pic the first day. I was freezing and I was more concerned with trying to figure out how to unfreeze the wound. 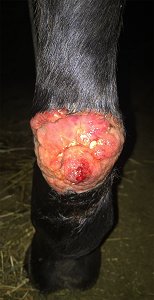 Day 10 after injury is how the wound looked the just before the Silver Whinnys Deconstructed Tubes were put on.

From here Jetta’s study photos will show results by how many days the socks have been bandaging the wound.

12/9/2014, Day 4 of socks:
Owners Note: 12/9/2014 I put the Whinny Warmers® on as well to help keep extra pressure to hold everything in place. I think the socks as opposed to the quilt and polo is what was helping the proud flesh because it is breathable but keeps enough of her body heat on it to keep it from freezing.

12/17/2014, 12 days of Silver Whinnys:
Owner note: 12/17/2014, 12 days of Silver Whinnys “I have started gently scrubbing the proud flesh then putting the sock on then an old splint boot to add the compression for the proud flesh. It's much flatter and healthier now if the weather would just cooperate for me so it would be easier to be doing this. I haven't had to cut any tubing off. It's doing really well with not attaching to the tubing and it comes right off with just some gentle moving. So just been washing the tubing and reusing.

12/22/2014, Day 17 of the socks:
Owner's Notes: 12/22/2014, Day 17 of the socks. “I could not be happier with the healing on this wound. It's got great blood flow the nugget of flesh is consistently shrinking and the overall size of the wound is getting smaller. No proud flesh all tissue and it's completely flat now. I tried leaving it just with the sock yesterday for a little bit then it started snowing so I went back out. I've gone from a standing bandage to just an old performance splint boot so at least that's more breathable than the quilts and polos but still keeps it warm enough to not freeze and keeps the tubing in place. Haven't had any problems at all with it sticking to the und, which has been really nice.

The image below is the deconstructed Silver Whinnys® on Jetta's leg. 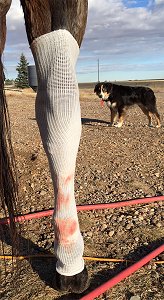 The owner could also have doubled them down on the cannon and that would have worked well too. Other wraps over the sock was absolutely necessary due to extreme winter temps.

12/25/14 Day 21 of the socks – One month since injury:
Owner’s Notes: Woohoo!! We have new skin growing up from the bottom!! It is one month today since it happened and I never thought it would look this good let alone this good in only 21 days with the tubing. My vet is very impressed with how it looks.

01/04/2015 Day 31 of the socks:
Owner’s Notes: 01/04/2015 Day 31 of the socks: Ok the wound itself looks AMAZING still good color and there's NO EDGES anymore. Everything is one level and is much smaller. Only concern now is she had a ton of swelling going on in that leg now. Im not sure if it's bc she's not moving around as much due to how cold it is she's just standing in the barn or something else. She's stiff on it not dead lame and just the last couple days. We got a lot of snow and were at -40 at night so I'm thinking she didn’t want to move around a lot and maybe stocked up.

01-16-2015 Day 43:
Owner’s Notes: 01-16-2015 Day 43: Good news. Swelling is completely gone in her leg. I saddled her up tonight and just went for a stroll. She is feeling good and was hot to trot. She was being a total firecracker and felt awesome. No soundness issues whatsoever. The sock doesn't stick to the wound any more. She's standing here with just the tube and she was able to not have wraps yesterday either since its been in the 50s. 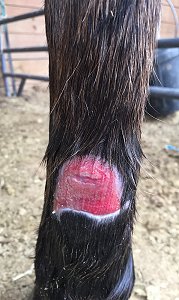 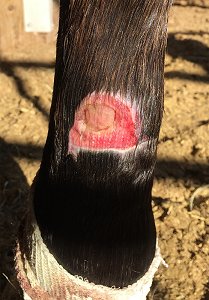 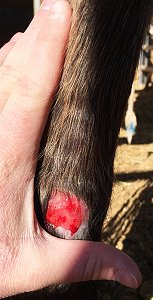 04/5/2015 Day 121:
Owner’s Notes: 04/5/2015 Day 121: I have been using just the Summer Whinnys (not the tubes, but the socks) for a few weeks now and it's almost healed!! There's just a small part still open. Ended up with some scar tissue on either side but nothing like it was going to be without the SOX thanks for all your help I really appreciate it. 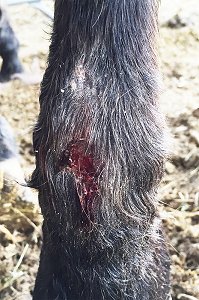